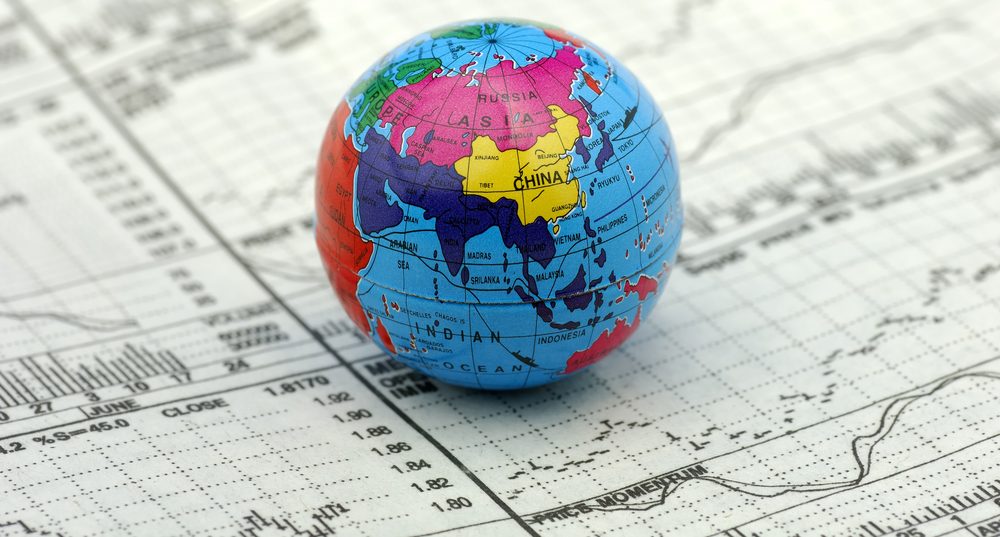 We are moving from a period of low inflation and very accommodative monetary policy (“goldilocks”) to a period in which inflation trends up and central banks’ liquidity is reduced. We continue to expect equities to do well in this environment and bonds to lag. Within equities, we prefer emerging markets, Japan and Europe, whilst we are more Neutral on US and underweight Australia.

A key question (perhaps the leading question!) for the markets in 2018 (and beyond) will be what impact the unwinding of most unconventional monetary policies will have on asset classes’ performance. All else being equal, the US Federal Reserve will begin to sell assets on its balance sheet, European Central Bank (ECB) will reduce its asset purchase programs and Bank of Japan (BoJ) will also likely follow suit (worth noting that the BoJ has been purchasing less than the monthly amount it has set out).

Background. Among the most important contributors to the proper functioning of financial markets is liquidity. This is why the central bankers around the world went on an asset purchasing binge post the GFC, which saw their respective balance sheets balloon (figure 1 – currently sitting at US$14.3 trillion combined for US Fed / ECB / BoJ). This was done to provide markets with liquidity and confidence. This has been a significant driver of higher equity markets, as yields have been driven lower making risky assets an attractive proposition (figure 2 shows how the S&P500 index has tracked the growth in Central Banks’ balance sheets).

Why is this so important? Because how this normalization process plays out is highly uncertain and has wide-reaching implications, even if the US economy (and the global economy) is in good shape. The US Fed’s balance sheet is made up of US$2.4 trillion in Treasury bonds and about US$1.8 trillion in Agency Debt & Mortgage Backed Securities (MBS). The Fed will now be a seller of these assets and will look to remove US$50bn of Treasury and mortgage securities per month. Put another way, US$600bn p.a. will need to be absorbed by the private sector. In our view, if the private sector takes these securities off the Fed’s balance sheet, it will demand higher interest rates (that is, bond yields go up & value comes down). Further, this will push up borrowing costs for businesses and consumers (housing). A rising interest rate environment is also negative for risky assets (equities).

2018 unlikely to be impacted. In our view, US Fed deleveraging in 2018 is unlikely to have a material impact on the markets. So far, the markets have shrugged it off, instead focusing on the momentum in the US economy. Where things will become a lot more interesting will be when the ECB and BoJ look to undertake a similar deleveraging process potentially in 2019/2020, given their respective balance sheets are larger than US Fed’s balance sheet (and still growing).

Inflation – Where art thou?

The inflation debate will remain an important discussion as it will dictate the path of interest rate rises. Despite the ongoing improvement in global economic growth, inflation remains a weak point for many economies. What drives inflation – economic growth leads to increased utilitisation which in turn drives up demand for labour. Tightening labour markets should drive wage growth, which in turn should drive prices higher. However, despite tightening labour markets and solid economic growth, wage growth has been anemic globally.

Inflation still well below target. As the charts below indicate, inflation in US and Eurozone remain below their respective central banks’ target. Eurozone core inflation came in at +0.9% (YoY) in the Dec-17 quarter, while headline inflation improved on higher energy prices and not due to domestic inflation rising which would be a concern for the ECB. In the US, core inflation of 1.7% (YoY) remains below US Fed’s long-term target of 2%. In Japan, whilst the core inflation (which excludes fresh food) increased to +0.9% (YoY), it remains well below Bank of Japan’s inflation target of 2%.

What’s keeping inflation at bay. Whilst we do see positive green shoots on the inflation front, we note there are a number of catalysts keeping downward pressure on inflationary pressures: technological advancements (or disruption); competitive pressures (including new low-cost business models) limiting the ability of businesses to pass price increases through to the consumer; demographics shifts; and increasing demand for jobs coupled with population growth.

Positive signs for inflation in 2018. In our view, inflation picks up from here but may still disappoint in some regions (such as the Eurozone). Factors putting upward pressure on inflation: 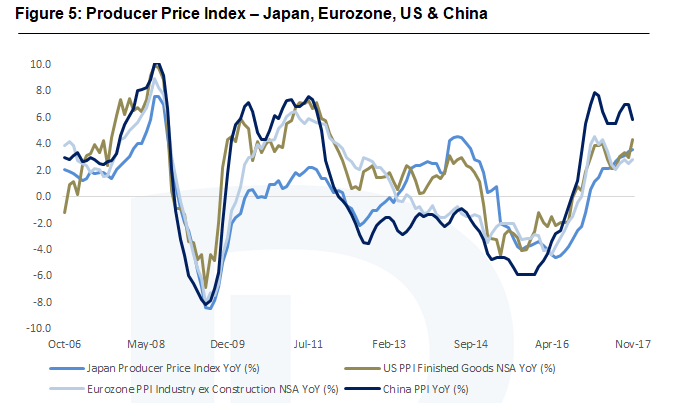 President Trump concluded the first year in the oval office – of what is likely to be a tumultuous first term – by delivering a landmark tax reform. Expected to cost approximately US$1.5 trillion, the income tax rate for businesses will be cut to 21% from 35%, which is expected to spur growth in hiring, business investment and incentivize corporates to repatriate cash back to the US. Some implications of the new tax policy:

(2) Consumers – since President Trump’s election, business (particularly small businesses) confidence has been rising. We expect the latest tax policy win continue to support high business confidence, but also translate into supporting consumer confidence. According to Americans for Tax Reform, more than 100 large corporates (e.g. Baltimore Gas & Electric, Bank of America, Visa, Walmart) have announced their intention to pass on the benefits of lower taxes to employees through bonuses, higher wages and benefits. This is likely to have a positive impact on consumer spending.

(3) Corporate activity could pick up – we see the potential of increased M&A activity levels now that there is certainty with the tax rates. One particular sector which could be a candidate for this activity is the Pharmaceuticals industry. The industry may use the repatriation of cash at attractive tax rate (15.5%) to revisit M&A opportunities previously parked on the side.

(4) Buybacks / capital management – we expect management teams to look to use the extra windfall from the tax cut to undertake additional capital management initiatives, such as dividends and buybacks. We note companies such as Cisco Systems, Coca-Cola and Pfizer have indicated that they intend to use the tax gains to increase dividends or buyback shares. We note the US market has typically been friendlier for buybacks given the remuneration/bonus structure of management teams incentivizes increases in earnings per share (EPS). The market appears to be pricing in the potential upside from this thematic, as indicated by the movement in S&P 500 Buyback Index since Nov-17 (the Index measures the performance of top 100 stocks with the highest buyback ratio in the S&P). 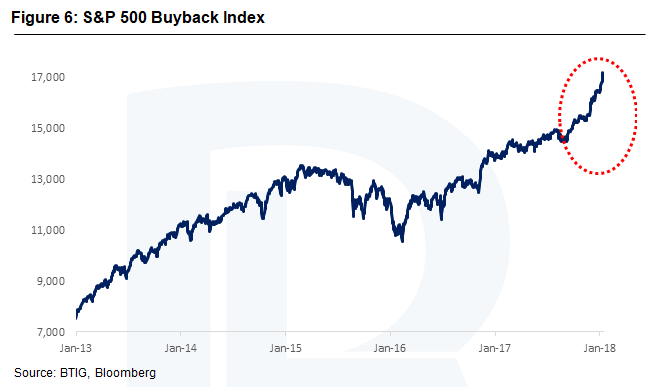 Global equities had a strong year in 2017, with solid gains across all key regions. The period was characterized by improving growth and low inflation – also referred to as “goldilocks”.

In our view, conditions in 2018 will also be supportive of equities (risk-on) with low but improving inflation and ongoing momentum in global economic growth. Whilst the threat of higher inflation, reduced liquidity (pullback from central banks) and rising interest rates will eventually be a negative for equities, we do not believe this will be an immediate concern in 2018, all else being equal. However, we would caution against chasing momentum stocks and would be inclined towards adding more defensive/quality names.

Global valuations. As we have done in the past, in the figure 8 we provide consensus earnings estimates by key developed markets and regions. Further, we have provided the PEG ratio (price/earnings to growth ratio) to put into context the headline PE-multiple and growth estimates. Based on the PE-multiple and dividend yield alone, Australia is looking toppy relative to the rest of the world besides the US. On a PEG basis, Australia stands out as the most expensive market.

Drilling down into key equity markets by sector, valuations continue to favour Emerging Markets and US, which has seen analysts upgrade their estimates on the back of the recent tax reforms. Europe’s performance lagged its global peers in 2017 and we believe 2018 maybe the year it catches up on lost ground. 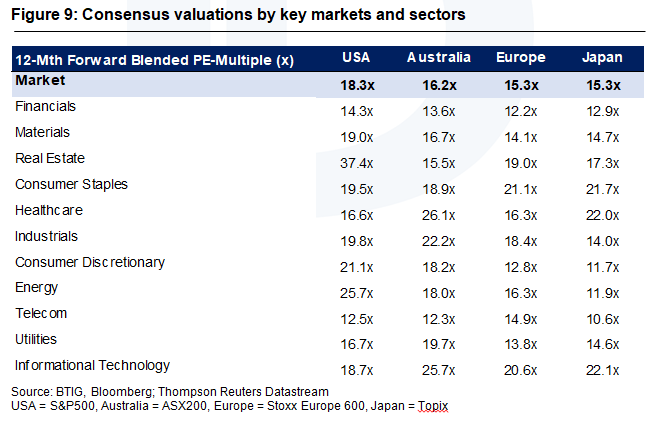 Japan continues to experience solid economic growth (two years running now), supported by accommodative monetary policy and improving global growth, which is also supporting exports. We see a stronger yen as the key catalyst which could disrupt this economic growth. Consensus continues to expect Japan’s GDP growth to moderate at +1.1% in 2018 (from 1.5% estimated in 2017) and 1.0% in 2019, due to concerns on slowing exports from potential US trade protectionism policies. We have previously highlighted that should these policies not materialize with the same impact as expected by the markets, there may be upside risks to consensus estimates. As we highlight in figure 10 (below), the pace of growth has accelerated in the second half of 2017.

Inflation is well below Bank of Japan’s target and is unlikely to be achieved anytime soon. We therefore expect stimulus to be ongoing. However, we do expect inflation to keep improving from current levels. As figure 11 highlights (above), the labour market continues to tighten, which is starting to encourage wage growth (figure 12) and household consumption (figure 13) – both positive for inflation.

The overall key to the Japanese economy is the movement in the yen. The Yen’s drop is a major positive for exports, overall economic growth and inflation. With the Bank of Japan (BOJ) managing the yield curve against the US, the widening yield gap (assuming the US Fed raises rates as expected) should lead to weakness for the yen. One of the key downside risks to the Yen is market volatility, specifically a risk-off environment, will likely see the Yen rise given historically it has strengthened in such an environment. 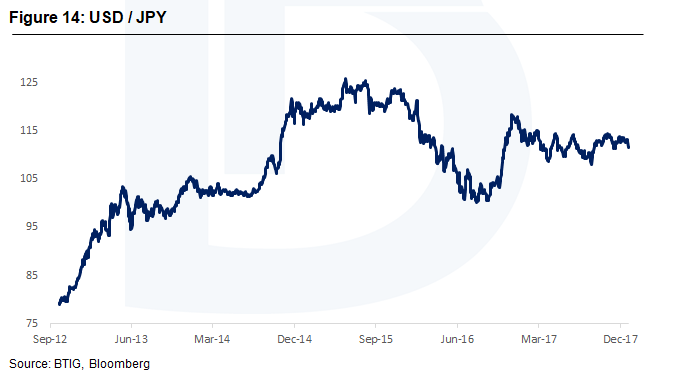 The eurozone economy continues to improve at a solid rate, with most indicators continuing to suggest healthy levels of activity going forward. While inflation remains low, we suspect this is due to the spare capacity still in the region and relatively high unemployment rate (despite it gradually trending lower). This dynamic continues to keep wage growth at bay and thus inflation low. Low inflation will keep the ECB from raising rates and therefore we expect accommodative monetary policy to continue in 2018. Key upside risks include lower unemployment and increased wages, whilst a higher euro could drag on economic growth.